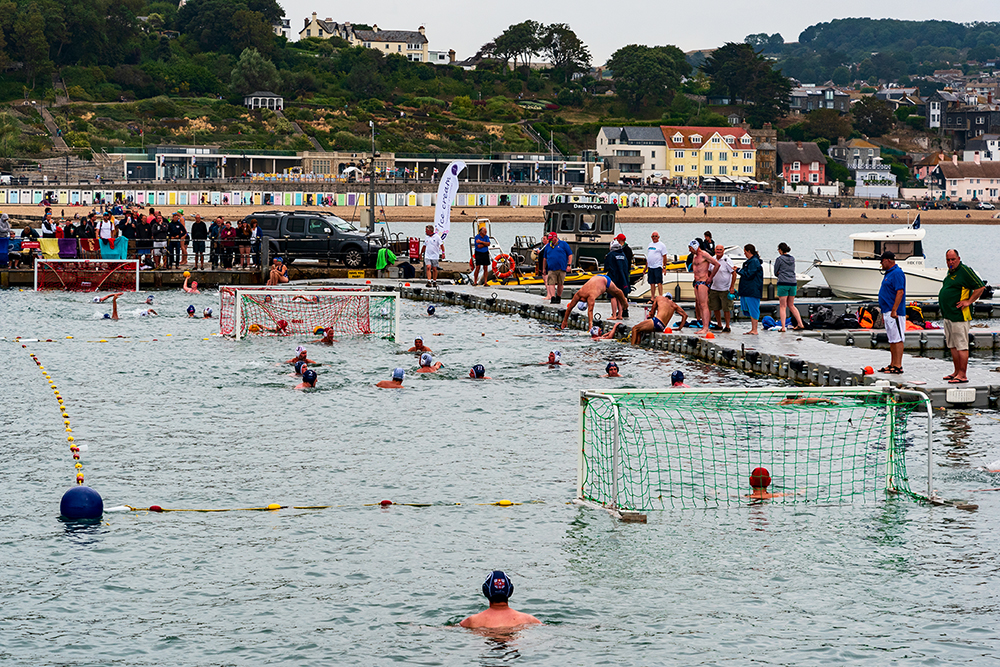 Having brought back water polo to Lyme Regis only three years ago, the 2019 Lyme Splash UK Sea Water Polo Championships has gone from strength to strength with another successful weekend when nearly 500 players and supporters took part in the event at the historic Cobb Harbour. During the weekend over 40 games were played in two floating pitches by 18 teams coming from as far afield as Newquay, Aberdare and Southampton and which included nine Women’s teams and two mixed Amateur “taster” teams.

Winner of the Women’s event was Southampton Sirens with Welsh Warriors as runners-up, while Valley Dragons/Cwm Draig won the Men’s event with Exeter & Taunton as runners-up. Winner of the Amateur matches was Lyme Launchers with runners-up Lyme Luggers. Sponsors Annie and Sam Hanbury of Baboo Gelato presented water bottles to the winners and medals to both winners and runners up. Players enjoyed camping over the weekend at Haye Farm and a BBQ together at The Power Boat Club, with raffle prizes from Wyvern Water Polo, finishing off with a wonderful firework display.

“We certainly exceeded expectations!” said Karen Durham-Diggins, Founder of Lyme Splash UK. “The Harbour Masters, volunteers, Swim England referees, officials and Fred Fowler from Bridport Barracudas Swimming Club all deserve a special mention. Our new goal posts from Lyme Regis Town Council’s grant had their first outing too and performed excellently! We’ve heard from people who have watched the games last year sign up to clubs and we are intending to add friendly games during the year as well as the Championship next year. We’ll be trying to get together a youth team soon. More details will be announced soon. Water Polo is back on the map in Lyme Regis!”

Lyme Splash is a not-for-profit organisation run by volunteers held as part of Lyme Regis Carnival and Regatta is the only Water Polo Sea Championship in the UK. This year’s charities were BSharp and Plastic Free Lyme Regis.