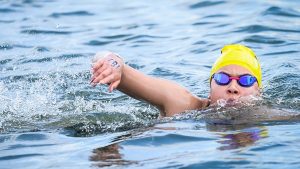 Strong winds forced the abandonment of the opening day of the 2018 Swim England National Open Water Age Group Championships; this year blue-green algae resulting in lake closure in the Rother Valley Country Park meant that fast action was needed to ensure this year’s event could even take place. This came as a second blow to Dorset swimmers who had already experienced the Swim England South West Open Water Championships at Weymouth being cancelled in July due to water temperature, and who had then to travel to the Midlands Open Water Championships at Nottingham’s Holme Pierrepont National Water Sports Centre to be able to qualify for the national competition. A last minute move, however, to Thrybergh Country Park in Rotherham meant the Championships took place on Monday 5 August with nine Dorset swimmers making the journey north to compete in either 2km (12/13 years), 3km (14/15 years) or 5km events according to age.