Two Dorset volunteers were recognised for their long-standing dedication to the sport at the regional Annual Council Meeting held in Taunton on 8 September.  Weymouth & Portland WPC’s Dan Kinsey received a South West Regional Adult Achievement Award, while Chas Wallace from Poole SC was presented with a Long Service Award. 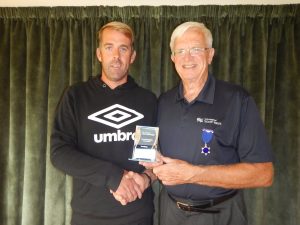 PE teacher Dan Kinsey, pictured left with retiring SWR President and Dorset’s own Bob Holman, started playing water polo for Weymouth & Portland at 11 years of age, rising to first team player at 15, and continuing the sport at university in UCAS competitions as well as an Under 21 Wales International. Dan returned to Weymouth as First Team captain and coach, captaining the team to win the Hampshire Water Polo League, and took Weymouth & Portland to National League status for two years running. Having started a successful development programme for young players in the Weymouth and Portland area, which has become an important part of the local community, he continues today coaching all club teams as well as organising and coaching Age Group and Senior Dorset County Teams. Despite a serious debilitating illness in 2015, a determined rehabilitation has meant that Dan has returned to work and also the sport he loves, as well as finding time to coach football for Bournemouth and rugby for Dorchester.

Chas Wallace is the ultimate example of long service to the world of swimming. Though now 94 years old, he is still a regular official at Dorset Schools Swimming Association events, but this reflects only a fraction of the service that Chas has given to the sport over the years. As with most volunteers, his first poolside experience came when his children started to swim and in 1957 he offered to help with a club session one night a week. Then, having qualified as a volunteer teacher and coach at Heston Swimming Club in 1967, a single club session rapidly became a life-long involvement in the sport. 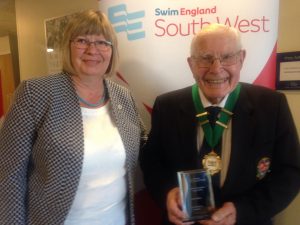 In 1977, Chas (pictured left at the SWR ACM) took a coaching post at Elmbridge Phoenix SC and was then persuaded to cover for a coach at Feltham SC at the same time, but nevertheless continued with both clubs for seven years. In his “spare” time Chas taught swimming at the Hounslow School of Life Saving for 16 years, and coached older swimmers to enter lifeguard competitions both in the pool and open water. In 1990, having been approached by a local Lions group on how best to run an inclusive event for young people with disabilities, Chas next developed a handicap system to cater for all. His involvement with these disability events lasted for 20 years, and he continued to travel back to events long after his family had moved to Dorset. In 1996 Chas became a member of Wimborne Swimming Club, which continued until the club disbanded in 2007. As a qualified official, Chas retired from the Dorset County Officials list in 2006 at the age of 81, but continues to support DSSA events when asked.