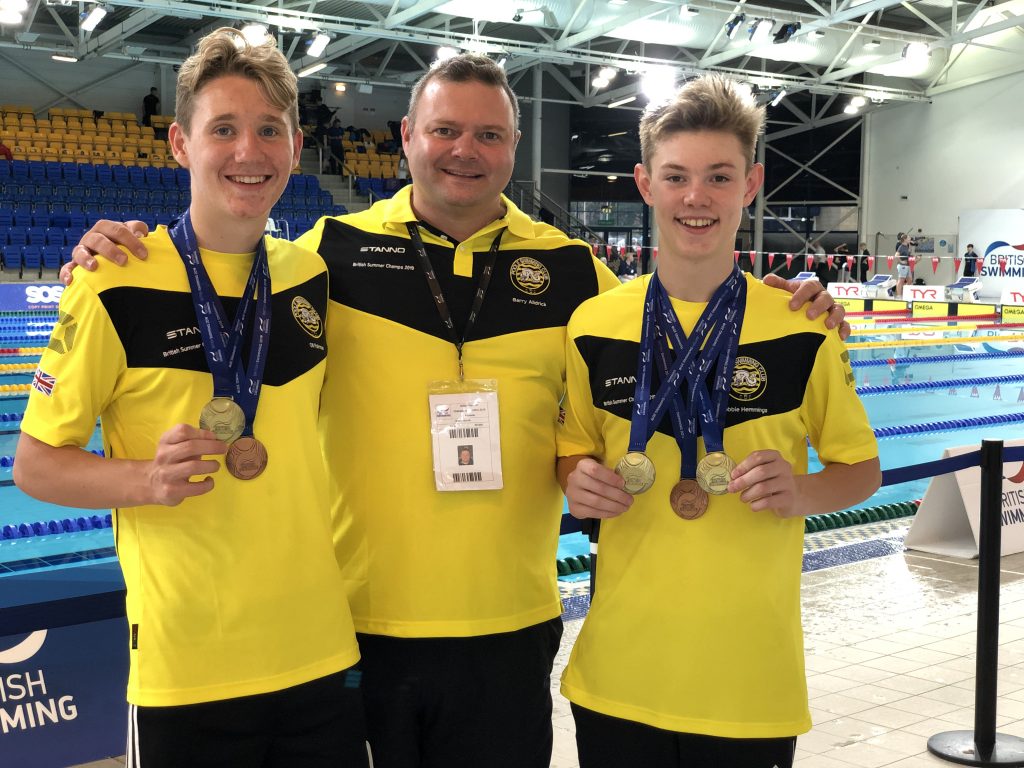 The six-day 2019 British Summer Championships ended at Tollcross ISC in Glasgow on 28 July with Dorset swimmers bringing home five British Nationals medals. Poole SC’s Robbie Hemmings undoubtedly had one of the best weeks of his life clocking up ten personal best times throughout the competition and culminating in a gold medal in each of the 15 Years 100m and 200m Backstroke events with times of 57.86 and 2:06.16 respectively, the latter knocking almost four seconds from his entry time, together with a bronze medal in the 50m Backstroke (27.18). With a few months to go before his fifteenth birthday, times achieved in the 50m and 100m Backstroke events also set new British Age Group Records for the 14 Years age group, while Hemmings also made the final of the 200m Individual Medley knocking a full four secs from his entry time to finish fourth on 2:11.71, as well as the 50m Butterfly final placing sixth on 26.36.

Alex Bryant (Poole) earned his highest position of the Championships finishing fourth in the final of the 50m Backstroke (26.61), just a place ahead of teammate Oli Fairman, while Seagull’s Sonny Chamberlain-Hyde reached the finals of the 16 Years 100m Backstroke and 200m Backstroke to place tenth and eighth with pb’s of 1:00.50 and 2:09.41 respectively. In the 13/14 Years 200m Breaststroke Connor Cherrington (Swim Bournemouth) retained his ninth place from the heats to finish in the same spot in the final but having pb’d in both to prune his entry time from 2:37.63 to a creditable 2:33.73. Last male Dorset finalist of the Championships was Nathan Moorey (South Dorset/Chard) who finished ninth in the final of the 16 Years 50m Butterfly with a time of 26.56.

In the girls events, Tanya Blanchard (Wareham) and Phoebe Kelman-Johns (Swim Bournemouth) both made the finals of the 50m Breaststroke with Blanchard placing eighth in the 16 Years final in 33.81 and Kelman-Johns finishing fifth in 32.67 (pb) in the 17/18 Years age group. Kelman-Johns also made the final of the 100m Breaststroke finishing in sixth place with a time of 1:12.42. Swim Bournemouth’s Ella Chown qualified for the final of the 16 Years 50m Butterfly finishing in eighth place in a time of 28.42 (pb).