The one stop place for all county ASA results, dates and information. 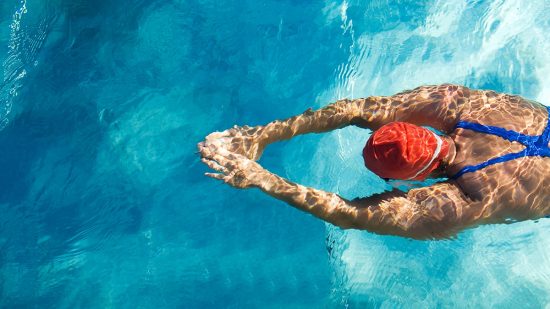 Prime Minister Boris Johnson announced yesterday that a regional tiered approach to tackle the spread of coronavirus will come into effect from Wednesday 2 December but with the bonus that swimming pools and leisure centres will be allowed to open again.

Swim England is waiting for the Department for Digital, Culture, Media and Sport to publish updated guidance later this week to understand the full impact on our sports, and in particular what the new system will mean for organised group activities for over 18s, but following is what is known at the moment.

Under 18s will be exempt from restrictions as before so all club activity for all disciplines and learn to swim sessions for under 18s are unaffected.

In tier one areas, indoor sports for over 18s can take place within the rule of six. For example, participants from different households could play three v three water polo. Group activities for over 18s  such as club training sessions and exercise classes can take place in larger numbers, provided that participants are in separate groups (up to six people) that do not mix.

In tier two areas, over 18s can take part in indoor group activity provided there is no mixing between households. People can play certain sports which do not involve close proximity or physical contact against one person from another household.

In tier three areas, indoor sport for over 18s will be restricted to within your household only and there should be no group activity such as exercise classes

Last month Sport England announced a £16.5 million Return to Play fund with various pots of cash to give a helping hand to organisations financially impacted by Covid-19 restrictions – an opportunity that Christchurch based Seagulls SC was certainly not going to miss. As part of the Active Together crowdfunding initiative, the club aimed to raise £7.5k in one month with a bonus of 50% match-funding (£3,750) from Sport England provided the club reached within 25% of its target.

The venture was kicked started by Seagulls Chairman David McWilliam with an arduous 96 mile county-wide bike ride to visit all the home pools of Dorset clubs in one day. Setting off on 24 October from Two Riversmeet LC at a dark and chilly six o’clock in the morning, the first stop was Bournemouth Collegiate School then on to Littledown where Swim Bournemouth was already training hard.

Pausing only for a selfie at Stokewood Road, the home of Bournemouth SC, on to Poole and then a longer drag over to Wareham where David, having arrived at the Purbeck Sports Centre, immediately looked onwards to Dorchester stopping only for a quick pit stop after 33 miles. 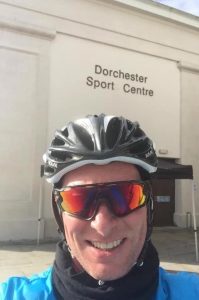 As the weather brightened, the ride into Dorchester involved a big but picturesque climb over Came Down, and then it was all downhill into Weymouth in view of the bay busy with cruise liners – but soon to be followed by a very blowy ride across the causeway to Portland and Osprey LC, home of Weymouth & Portland WPC and former home of Tornadoes of South Dorset. 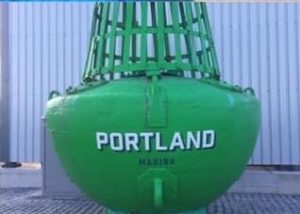 Next came the tough section to Bridport and the B3157, with plenty of hills and the traffic far too close for comfort, where David finally arrived at his nemesis – Abbotsbury Hill, which has a brutal incline of 17 deg. “It beat me last time and it beat me again – 75 miles in and I had the shame of having to walk up it!”, said David.

Finally arriving in Bridport after 85 miles and “in pieces”, David was greeted by the welcome sight of his support driver, Seagulls’ treasurer Martin Jaszek. “My legs were shot”, said David “and I had to make the sensible call that there was no way I would make the hilly ride to Sherborne and Shaftesbury before finishing in Blandford as time and my legs were against me. We drove to those two pools and I then cycled from Shaftesbury to Blandford”.

One last ramp at Melbury Abbas near Compton Abbas Airfield was conquered before the final ride into Blandford, with David arriving just after mid-day in 6hr 12 min and all of which involved 96 miles, 3689 calories and 4228 feet/1288 metres of climbing.

Reviewing the ups and downs of the day, David said: “I am disappointed not to complete the full ride but my goal was to raise the profile of our Crowdfunding campaign and I think we did that. We have currently raised an amazing £7807 and still with ten days to go”. Congratulations David – you have done your club proud! 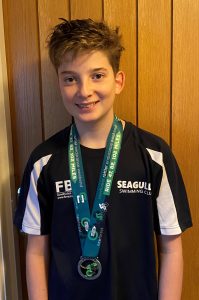 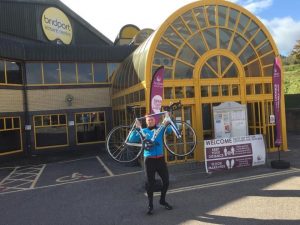 With his sights also set firmly on supporting his club, and no less effort, Seagulls’ Edward Bell (shown right with his New Forest Rattler achievement award) took to his bike on 24 October as well to participate in the annual New Forest Rattler Endurance Weekend, and bravely opting to attempt the mid cycle circuit route of 82 miles alongside his dad. Despite the very poor weather conditions, the 12-year-old successfully completed the route and within the allotted time, raising £370 from family and friends for the club. An amazing achievement – well done, Edward!

All public and private pools in England have been forced to close until at least Wednesday 2 December as part of the restrictions introduced to combat the spread of coronavirus. This is what the new restrictions mean for all aquatic activity.

School swimming lessons as part of the national curriculum can take place in a school-owned pool or usual venue if the operator is open.

Swim England understands boarding schools may use their own facilities for their pupils as now, but may not invite those outside the boarding school into the facilities. This will be confirmed later today. It is understood university pools may only open for elite return-to-training purposes.

All pools must close unless able to stay open to facilitate school swimming lessons only. Private pools are only be used by the owner’s immediate family or support bubble and must not be hired out.

Club activity at pools must not take place at pools during the lockdown. Virtual home activity sessions can be organised by clubs to help keep members active.

All learn to swim sessions, including baby swimming, are on hold during the lockdown. No 1-2-1 lessons that are held in private or endless pools can take place.

Elite training can continue in designated facilities under the original Return to Training Guidance. Only those swimmers who were named on the original list during the first lockdown are eligible. Swim England will be working with British Swimming to try to keep these swimmers in the water if possible. 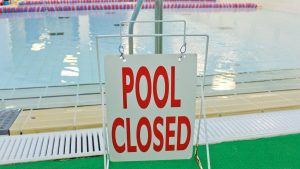 In a bid to tackle the spread of coronavirus, MPs voted today in favour of a second national lockdown that comes into force in the early hours of 5 November and will last until at least 2 December. Pools and leisure centres have been told to close but Swim England understands that school swimming lessons, as part of the national curriculum, will be allowed to take place.

Swim England CEO Jane Nickerson said: “Swim England fully supports measures to reduce the spread of the virus and help protect our NHS but this decision is incredibly disappointing for the millions of people who benefit from being active in the water up and down the country for their physical and mental wellbeing. It was heartening to hear a number of MPs speak up in the chamber on behalf of swimming and other affected sports following our lobbying work and I hope the Government took those points on board when considering which facilities are able to reopen. I would again thank the 23,000 people who took the time to sign our open letter to the Prime Minister in advance of today’s debate. We consistently made the case that pools were well-managed environments with a proven record of incredibly low transmission rates which makes the decision to close them particularly frustrating.”

Swim England is now seeking clarification on an exemption to a clause in the legislation around ’indoor gyms, fitness studios, indoor sports facilities and other indoor leisure centres for supervised activities for children’, and has been in discussions with the Department for Digital, Culture, Media and Sport throughout the day to see if this relates to learn to swim sessions and organised club sessions for under 18s. A number of leisure providers are also taking advice on this point but the DCMS has so far been unable to provide any clarification to Swim England. It is understood that all private pools face the same restrictions as public leisure facilities, but Swim England is seeking clarification on this matter too.

Jane Nickerson added: “We are working to see if the clause in the legislation gives us an opportunity for under 18s to be in the water in learn to swim sessions and club activity. We understand facility owners and operators are taking advice and are making plans based on the guidance they receive. As soon as we have the official Government position, we will let you know.”

Exemptions to the lockdown rules include elite athlete training and Swim England will be working with British Swimming to clarify who will be eligible for this. 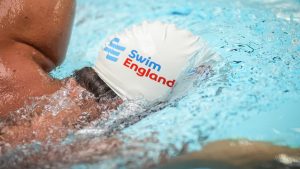 Swim England’s Head of Fundraising, Michael Mogan, is to lead two online fundraising seminars early next month to help club to boost their coffers. This comes as Sport England announced details of a £16.5 million Return to Play fund which has been set up to help groups, clubs and organisations financially impacted by coronavirus restrictions. The free seminars will focus on the Return to Play: Active Together element of the Sport England, which has £1.5m available to clubs as part of a crowdfunding initiative. Match-funding of up to £10,000 is available to cover loss of income.

Sports clubs and organisations are being encouraged to set up their own campaigns to help sustain them through the pandemic. The Swim England seminars will focus on the best ways to achieve this but will also touch on other areas of the Return to Play fund and other opportunities that can help bring cash into the clubs. The workshops take place on Wednesday 4 November and Wednesday 11 November from 6pm and clubs can sign up to three volunteers to attend by clicking here.

Claire Coleman, Swim England Head of Development, said: “The crowdfunding initiative will help clubs and organisations set up their own campaigns to help sustain them through the coronavirus crisis. It’s a great alternative if they don’t meet the criteria of the other aspects of the Return to Play package. We’re keen to hear from any aquatics clubs that may have already had success through other fundraising campaigns to share their experiences. If you wish to get involved, please contact us by emailing volunteering@swimming.org.”

The other two elements of the Sport England Return to Play fund are small grants and the community asset fund. A total of £10 million is in the small grants pot and clubs, groups and organisations can apply for between £300 and £10,000 to respond to the immediate challenges of returning to play in a Covid-19-safe environment. The community asset fund has £5 million available to provide grants ranging in value from £10,001 to £50,000.

Further details about the Sport England packages are available by clicking here.