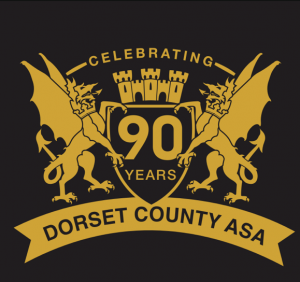 Dorset County ASA celebrates it 90th Anniversary. The Inaugural Meeting was held at the Junction Hotel in Dorchester on 28 March 1931 and attended by President of the Western Counties ASA, Captain George de Vere Welchman, together with the Regional Treasurer Mr E W Jordan and Secretary Mr R A Colwill. An English diving champion from Sherborne, H E K (Keith) Sawtell, represented the Amateur Diving Association and having helped to bring the various swimming interests in the county together, was elected as the first President of the Dorset County ASA. Also present at the Inaugural Meeting were representatives of swimming clubs from Bridport, Dorchester, Lyme Regis, Wareham, Wimborne and Weymouth, while Poole SC affiliated in June 1931.

The handwritten minutes of that meeting still exist today and record that a grant of £5 was made by Western Counties ASA to assist in the establishment of the newly formed County Association. The minutes also reveal details of club affiliation fees – up to 15 members the sum of 12s 6d, up to 50 members £1 10s, and up to 100 members the princely sum of 2 guineas. According to the National Archives, the value of those sums today would be circa £30, £73 and £102 respectively, and compared to the average weekly wage at the time for a 50 hour week of £1 8s 10d (£70 today) probably represented a significant outlay to the newly affiliated clubs.

The very first County trophies were also awarded in 1931 – but for only for Diving, and for the Men’s and Boys’ 100 Yard Freestyle events.

Since 1931, our clubs have continued to play an essential and valued role in the County Association, contributing greatly to the local community and the wider sport.